Winner of Design the Mobile Phone of Tomorrow is eXtremely happy! 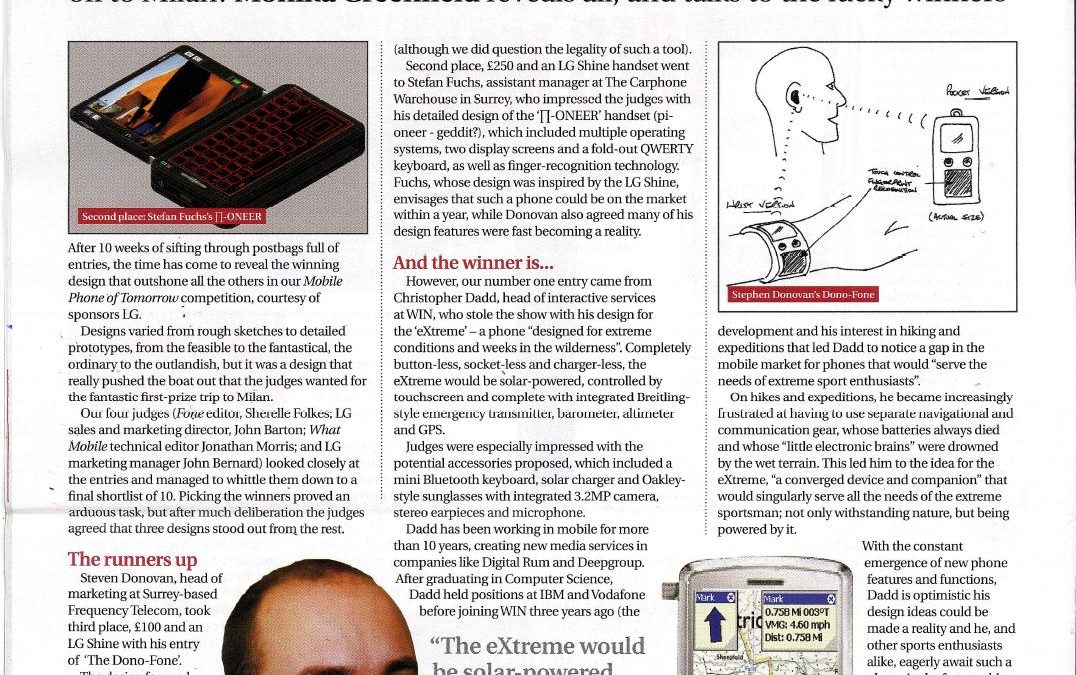 The entries for our Design the Mobile Phone of Tomorrow competition came in thick and fast, but who triumphed and, more importantly, who is off to Milan? Monika Greenfield reveals all, and talks to the lucky winners.

After 10 weeks Of sifting through postbags full of entries, the time has come to reveal the winning design that outshone all the others in our Mobile Phone of Tomorrow competition, courtesy of sponsors LG.
Designs varied from rough sketches to detailed prototypes, from the feasible to the fantastical, the ordinary to the outlandish, but it was a design that really pushed the boat out that the judges wanted for the fantastic first-prize trip to Milan.

Our judges looked closely at the entries and managed to whittle them down to a final shortlist of 10. Picking the winners proved an
arduous task, but after much deliberation the judges agreed that three designs stood out from the rest.
The runners up Steven Donovan, head of marketing at Surrey-based Frequency Telecom, took third place, Sl DO and an LG Shine with his entry of ‘The Dono-Fone’. The design focused on unique features, such as an integrated electronic entry key, personally programmed
for your home or car, an electronic wallet for direct payment from your phone; and an additional “laser stun-gun unit to be used against would- be attackers (although we did question the legality of such a tool).
Second place, E250 and an IIG Shine handset went to Stefan Fuchs, assistant manager at The Carphone Warehouse in Surrey, Who impressed the judges with his detailed design of the TI-ONEER’ handset (pi-oneer – geddit?) , which included multiple operating
Systems, two display screens and a fold-out QWERTY keyboard, as well as finger-recognition technology.
Fuchs, whose design was inspired by the LG Shine, envisages that such a phone could be on the market within a year, while Donovan also agreed many of his design features were fast becoming a reality.

And the winner is…

However, our number one entry came from Christopher Dadd, head Of interactive services at WIN, who stole the show with his design for the ‘eXtreme’ — a phone “designed for extreme conditions and weeks in the wilderness”. Completely button-less, socket-less and charger-less, the extreme would be controlled by touchscreen and complete with integrated Breitling-Style emergency transmitter, altimeter and GPS.

Judges vvere especially impressed with the potential accessories proposed, which included a mini Bluetooth keyboard, solar charger and Oakley-style sunglasses with integrated 3.2MP camera, stereo earpieces and microphone.
Dadd has been working in mobile for more than 10 years, creating new media services in companies like Digital Rum and Deepgroup.
After graduating in Computer Science, Dadd held positions at IBM and Vodafone before joining three years ago (the “The eXtreme would
be solar-powered, controlled by touchscreen” company behind Vodafone Alerts, as well as many of the T-Mobile T-zone updates). In his spare time, Dadd has a keen interest in outdoor activities, claiming adventurous risk- takers such as climber Bear Grylls and survival expert Ray Mears as his It was this combination of expertise in product development and his interest in hiking and expeditions that led Dadd to notice a gap in the mobile market for phones that would “serve the needs of extreme sport enthusiast.
On hikes and expeditions, he became increasingly frustrated having 10 use separate navigation and communication gear, whose batteries always died and whose “little electronic brains” were drowned by the wet terrain. This led him to the idea for the
extreme, “a converged device and companion” that would singularly serve all the needs of the extreme sportsman; not only withstanding nature, but being powered by it. With the constant emergence of new phone features and functions,
Dadd is optimistic his design ideas could be made a reality and he, and other sports enthusiasts alike, eagerly await such a phone in the foreseeable future. ‘”I always thought it would be cool to invent something so iconic that most of the civilised world would know of it, ” claimed Dadd, on hearing he had won the competition.
Who knows — perhaps his design will inspire a manufacturer to bring that dream to life. For now, though, we congratulate our finalists on their design prowess; especially our winner, Chris Dadd, who will be jetting off with his delighted partner, new phone and E500 spending money to bask in the glory of success in magnificent Milan.